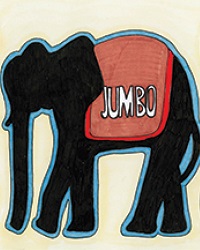 × From playwright Sean Dixon (The Wilberforce Hotel, Lost Heir, The Outdoor Donnellys), comes the story of one of the biggest icons in show business, the one, the only, Jumbo the Elephant. In the early fall of 1885, P.T. Barnum’s Greatest Show on Earth toured South Western Ontario, playing to sold-out crowds in the tens of thousands in Guelph, St. Thomas, and London. On the bill, among the snake charmer, the aerialists, the tightrope walkers, the contortionists, and the famous bearded lady, Annie Jones, were 28 elephants led by world renowned Jumbo. Between their stops in Guelph and London, Barnum’s circus played the bustling railroad city of St. Thomas, Ontario to standing ovations. But that fateful night, when the circus cars were being packed back up, an unscheduled freight train travelling unbrakeably fast through the railyard ended the career and the life of the biggest star in the world. Jumbo runs from June 12 - August 10.