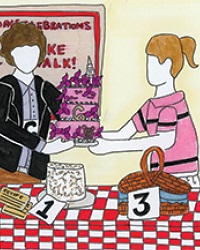 × In celebration of our 45th anniversary, we are bringing back one of the sweetest, most requested revivals in our decorated history. Cakewalk by Colleen Curran is a delicious comedy that premiered at the Blyth Festival in 1984 and went on to international acclaim. In honour of Canada Day, a small town decides to hold a cake baking competition at the local fairgrounds and everyone from the community is lining up for the chance to win a dream vacation and county-wide bragging rights. It’s enough to bring a local nun out of her habit, send a mother-of-the-bride running with five layers (topper and all), and to unleash the winner-take-all cut-throat tactics of the town’s normally dependable Boy Scout troop leader. The oven mitts are off. Someone’s going home with the trophy, and someone is getting butter-creamed. With five hilarious roles for women, this show will be icing on our 45th anniversary cake. Cakewalk runs from June 26 - August 10.