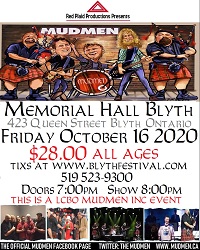 Formerly signed to EMI records, the Mudmen have 9 studio cds, had 6 music videos on Much music/MTV reaching #19 on the Edge Radio countdown. With 22 years together, festival performances in Europe, the United States & Canada, 40 cross Canada headlining tours, opened up for ZZ Top, the Guess Who, George Canyon, and over 3,000 shows to date, Ron MacLean loves em you should too! For more info on the Mudmen visit www.mudmen.ca. Showtime is 8:00 pm with the doors opening at 7:30 pm. Tickets are $28.00 for this all ages shows.

This is an all ages, Mudmen Inc. Event.