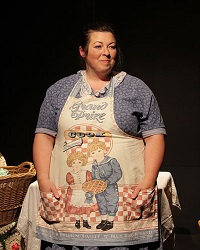 Come spend some time with Millie Johnson as she spins tales about life on the farm in 1950’s Northern New Brunswick, when working hard had a whole different meaning and homemade bread was served at every meal. Millie teaches us lessons in acceptance, love, and the importance of being able to use a rifle! The story of raising five girls on a New Brunswick farm will leave you inspired, touched, and wondering when you can return for a cup of tea at Millie’s table. ​ The Downs is a one-woman show written and performed by local artist, Sheryl Scott. Directed by Desiree Baker and produced by Debra Chantler. The Downs received The People’s Choice Award and Sheryl Scott won the Outstanding Actress Award at the London One Act Festival in 2013. The show also took the Producer’s Pick Award for the 2015 London Fringe Festival. Written and performed by Sheryl Scott, directed by Desiree Baker.