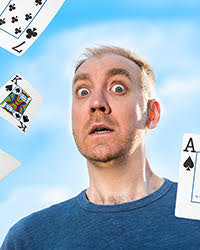 From the writer of Stag and Doe, The Birds and the Bees, Bed and Breakfast, and The New Canadian Curling Club, comes a hilarious one-man comedy about a down-on-his-luck DJ, a local lottery, and the search for truth in these unprecedented times. When big city radio host Charlie King is forced to take a job managing a small-town radio station, he has no idea what’s in store! Not only does a pandemic begin his first week in, but he quickly finds himself chasing a story of municipal corruption, and running the Chase the Ace fundraiser, live on air. The radio jock and the dozens of locals (who keep phoning in) become the touching lifeline to neighbours under stay-at-home orders.
Festival favourite, Mark Crawford, is back, and this time he’s playing all the characters on and off the air in this hilarious new comedy.